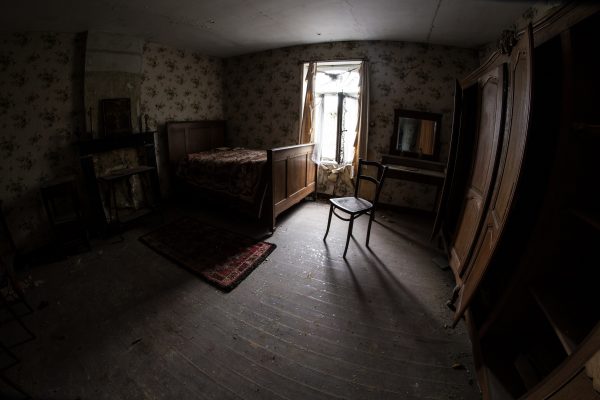 I’m trying to be as respectful as possible in sharing this story with you, but I need to tell the world about it or I will go insane. For those of you who don’t know, Airbnb is a service that allows homeowners to rent out their houses for a few nights or for longer stays to visitors, essentially turning your place into a hotel. I’ve stayed at a few of them, and though some were better than others, none come close to what I experienced one late night in the desert region of the United States.

My plane arrived late, as expected, and there was some strike going on with Uber and the prices for a ride to my Airbnb were through the roof, but I had no choice but to pay $80 for a 15 minute ride to the address that the host had sent me while my phone was still on airplane mode. 5667 was the code to get into the gate, he said. There were very detailed instructions on how to to get into the house –almost too detailed. Park downhill from the house, don’t disturb the neighbors. Enter the keycode exactly as listed followed by the # key. Follow the path of red bricks toward the back of the house. Key will be on the door and ready for you. Do not disturb the neighbors. Yes, he said it twice. This was a self-service type of stay, I guess nobody would be there to greet me and let me in. That’s fine, I thought. I actually preferred not having to make small talk with anybody and going straight to sleep.

The wind was blowing but the night sky was clear. I had never seen so many stars in my life. The Uber left before I entered the key code into the box, which was frustrating because I couldn’t seem to make the door click open and there was nobody in sight outside. Made sense. Who would be out at 1am?

Just as I was about to call the owner of the house, the door clicked open after I pressed the # key. Thank goodness.

The bricks wobbled as I followed the path to the back of the house, but when I finally got to the glass door, I saw the key. It had a keychain in the shape of a license plate, an Arizona one. I turned the key, opened the door, and found a normal room with a large bed, and two doors, one to the closet and one to the bathroom.

I opened the door to the bathroom and lifted the toilet seat only to find bloodied up toilet paper in the bowl. The person who cleaned must have forgotten to flush. I didn’t even want to open the lid of the trash can, but I couldn’t help myself and pushed the button with my foot to get the lid to pop open, but it had a clean white bag, to my relief. These things happen sometimes, and I’m not known to leave complaints on the review sections of anything, so I flushed the toilet, took care of my business, and went to the sink to wash my hands. When I looked up at the mirror, I saw crusty brown stains on the edges of the frame. I saw them on the corners of the faucet and the knobs. Dried blood.

I opened the door to the bathroom, grabbed my backpack from the floor and propped it onto the foldable table that I guess was supposed to be my desk for the weekend. I grabbed my shorts I would be sleeping in, took off my shoes, and changed to get ready for bed. I was so tired that I forgot to brush my teeth.

At 5am, my alarm went off, as always, and I sat up on the bed in silence. It was still dark outside, but I had to go to my meeting with a potential buyer. Mines are a dying business, but generally older people like to purchase them and contract workers to dig for residual metals, and where’s there’s a buyer, there’s a sales agent. And that’s me. I turned on the light to the bathroom, opened the faucet to the shower only to see brown water choke its way out and then get replaced by steaming hot, clean-looking water. Something was off about this place from the start, and I should’ve caught the signs sooner.

I was daydreaming in the shower when I heard a scream from the wall next door. Now, the house was obviously shared because my room had been sectioned off to serve as the Airbnb part of the house, so I had no idea of who was next door, but the scream was nothing normal so I grabbed my towel and ran outside to my room and stood there, dripping, waiting for something else to happen. But nothing happened. The morning was still, no crickets, no dogs, no roosters. Just dead silence. I went back to the bathroom and dried off, changed, shaved while making sure I didn’t touch too much of the sink, and got my phone to wait for another Uber.

Now, the houses weren’t directly next to each other in this area, it was a weird combination of a suburban neighborhood mixed with rural fields in between, and all of the houses looked old and had big yards all around them. I was walking toward the road just as the sun was rising when I heard a voice, from an older man, talking and laughing all by himself as he sat on an old white plastic lawn chair by his porch.

Then he got up, grumbling, turned his back to me, and walked into his house. He stood there for a while, but then he slammed the door so hard that I heard his windows rattle. I didn’t think much of it, but was definitely weirded out. The notification came through my phone that the Uber driver was two minutes away, but I saw the headlights in front of me, so I waved him down, I got in, said hello, and went to the buyer’s office in the downtown area.

It was getting dark when I got back, I took an actual taxi this time. 5667 #. The door clicked open, I followed the wobbly bricks, when I heard the door, my door, slide shut. I walked faster to my door, and I could see the curtains of the window moving around. The cleaning service, maybe? I felt uneasy but I opened the door, stepped in and looked around. Nothing seemed out of place… except for the closet door. It was right on the edge of closing shut or swinging open. As I stepped toward it, the vibrations of my footsteps on the wood floors must have triggered the door to open because the knob clicked and moved two centimeters open.

But I wasn’t prepared for what I was about to see. I swung the door open and tried to look inside. I stretched my arm out to grab the chain to the light bulb, but instead of a dangling chain or string, I felt a leather strap. A belt. I moved it around and heard the soft clinking of metal –the chain. I tugged on it and the light flickered on.

On the wooden bar where you normally would put clothes hangers, there was a belt in the shape of a… noose. It had been cut at the loop. A clump of long dark hair caught at the knot. Someone had been hung here. Then the belt was cut to release.. her.

I felt the urge to vomit so I ran to the bathroom, only to see bloody toilet paper in the toilet again. Frantically, I grabbed my backpack, stuffed by clothes back in, my towel, my charger, and looked around to see if I had forgotten anything when the lights went off.

I heard a scream. And then I screamed.

I slid the door open, and ran toward the gate. I grabbed my phone and requested an Uber. 8 minutes away. I walked toward the road again when I heard laughter once again. It was the same neighbor, but now the laughter also came from the house across the street. The neighbors looked at me and laughed. Their wrinkled faces and yellow teeth could still be seen thanks to to the orange street lights. All they did was laugh.

I walked faster, but their laughs grew louder. I got the alert. The Uber was nearby. I got in and the woman in the driver’s seat noticed the laughing and my panicked face. What’s going on here? She asked, with a smile.

I don’t know. Please, just drive. Her facial expression changed. We didn’t say a word. And I never found out about the place. I didn’t leave a review. I didn’t even look up the address on Google for news about that area.

All I know is that I am never staying in other people’s houses again.

The Little Girl Watching You From The Foot Of Your Bed